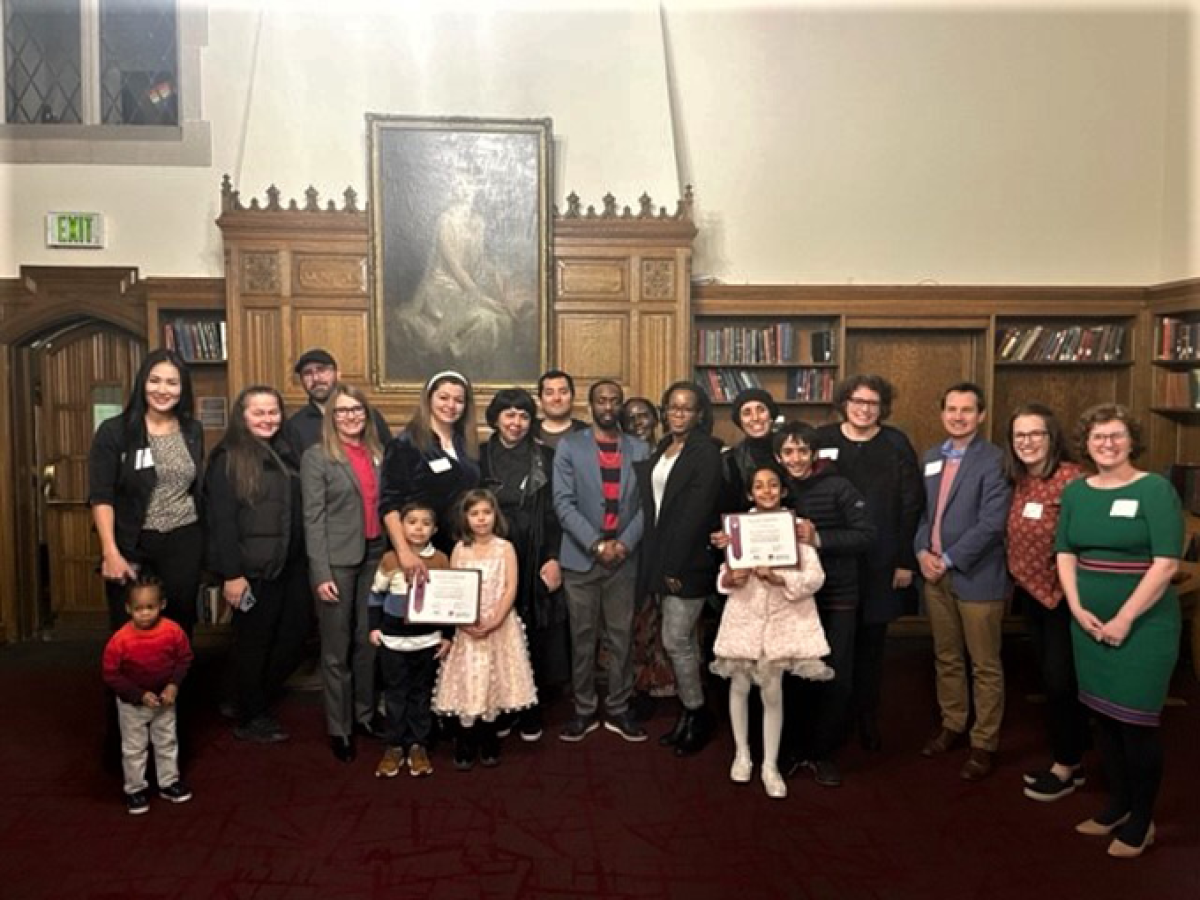 From the importing and exporting of halal food items to social media consulting to installing small solar panels that power the pasteurization of milk, the businesses launched by the immigrants and refugees in University College’s Business Development certificate program are as diverse as the countries they represent.

Offered by the college’s Center for Professional Development in partnership with Denver’s World Trade Center (WTC), the 16-week, four-course, noncredit program teaches those who have recently arrived in the United States how to start a business here. The third cohort of the program wrapped up in December, with students from eight countries earning their certificate. A graduation ceremony was held in DU’s Mary Reed Building on Dec. 12, the first in-person ceremony since the program was launched in fall 2020.

The online program is offered to students who are enrolled in the WTC’s Global Trade Activator program, which includes international business courses. University College’s option offers more robust instruction that is specific to immigrant entrepreneurs at any level and aims to improve their economic prosperity, says Teri Markle, associate dean of continuing education.

Students have varying levels of business experience and education—some have master’s and doctorate degrees from their home countries—but here, they’re starting over. “They might have two or three jobs, and they’re supporting families, but they have an idea for a business, and they need support in how to launch and grow this business, and that’s what this program is designed to do,” says Markle. “They might have a business background, they may not, but they need help in how to translate it into the business environment here.”

Taught by industry experts, the program covers business fundamentals, including how to create and successfully execute a business plan, branding and marketing, financial planning and legal pathways for business development.

Craig Maginness, who has been involved with the WTC for nearly 30 years and has had a long career in international business operations, teaches the Business Plan Fundamentals course. He says the program grew naturally out of the WTC’s longstanding international trade programming.

“In [that program], we had people from the immigrant and refugee community who were well on their way or already had businesses that were sophisticated, but there was a group who were sharp, motivated, dedicated people, but they didn’t have any business background at all,” he says. “So, their challenge wasn’t understanding letters of credit or international shipping terms—they needed a more basic foundation to get the most out of the international business programming.”

Maginness says he is continually “blown away” by the natural entrepreneurial skills, creativity and intelligence that students bring to the program. “They’re all very gifted and talented people; they just never really thought about how to take this amazing idea they have and what they actually have to do to turn it into a business—and how to keep track of the moving parts and do it in a way that sequentially makes sense so that they can get from the idea to actually doing it.”

One such entrepreneur is Chenielle Delahaye-McKenzie, who owns an all-natural plant oil company that makes and sells authentic Jamaican essential oils, butters, soaps, candles and more. She took the fall certificate course from Jamaica, with the goal of expanding her business to the U.S.

Delahaye-McKenzie has already been in business for five years but, with a background as a research scientist (she has a doctorate in the philosophy of biotechnology), she had a lot to learn about translating the medicinal properties of traditional plants into products that she can sell in different countries and scaling up her business.

The course helped her think about different aspects of business and the “nitty gritty” details she wasn’t aware of. “We were able to identify gaps that need to be filled and do our due diligence, and it really showed me what’s out there, what’s possible,” she says.

The budding entrepreneur especially appreciated the real-world opportunities the course provided. “The scenarios they used really shined a light on those areas,” she says. “The instructors helped me understand my numbers, set up a budget and work with the data I already have. They helped identify flaws on my website and showed why my sales probably aren’t as much as they should be—and found ways to fix it.”

Delahaye-McKenzie, whose business employs five people, says her long-term goal is to create a substantial business that can be passed down to her three children.

Providing access to opportunity and positively impacting the community goes to the mission of University College. For that reason, the program has been offered tuition-free to students. Initially funded through a University of Denver Grand Challenges grant, the program was so well received by participants and the community that University College decided to make it the focus of its One Day for DU fundraising efforts in 2022.

“We raised $17,000 on that day. It was phenomenal. We were expecting $5,000, maybe $10,000 if it was wildly successful. We felt like it was a message of support from the community to continue providing this programming,” Markle says.

Moving forward, University College hopes to raise additional funds that will allow it to offer the program tuition-free twice a year, expand the programming through the WTC and open it up to other organizations that may have participants who would benefit.

“Colorado has a pretty welcoming environment for immigrants and refugees, but that doesn’t necessarily set them up for success,” Markle says. “I think being able to play whatever part University College can and partner with organizations designed to help support economic prosperity at the community level is really important—I mean, that’s what our country was built on.”