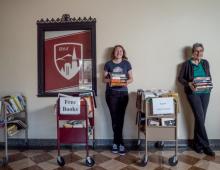 Have you ever wondered how Anderson Academic Commons continually updates its collection of books, scores, films and other research materials? The answer lies with a group of volunteers — initially women — who have been supporting the University Libraries, DU students and faculty since 1956.

Sixty years ago, Chester M Alter, then DU’s chancellor, was concerned about the library’s inability to purchase items for its collection. Alter asked University Trustee Marion Gottesfeld to assemble a group to address the library’s needs. Gottesfeld and eight fellow volunteers formed the Women’s Library Association (WLA), held fundraisers and solicited donations to support the library.

Since then, the WLA has expanded its membership to include men and subsequently become the University Library Association (ULA). The group continues to fund its endowment — which has grown to $1 million of support for the library’s materials — through guest lectures and social events. Members of the ULA also operate the Book Stack, a used bookstore housed in the Mary Reed Building on DU’s campus. Many former faculty and staff members from DU, student workers and members of the surrounding community are part of the ULA today.

Lois Jones and Pat Fisher, both retired DU librarians, are two ULA members who work in the Book Stack each week. Fisher says that after working for University Libraries for more than 30 years, she felt indebted to the ULA for its support and began to volunteer out of gratitude. “The ULA’s support of the library was really important, especially in the 1980s when the University was going through really tough times,” Fisher says.

Jones, who has been working at the Book Stack for the last 10 years, notes that her involvement in the ULA allows her to remain close to an institution she admires. “I thought volunteering would be a good way to keep up my connection with the library and the University,” she explains. “You’re doing something for the University Libraries, but I also enjoy the camaraderie.”

This kind of funding is what enables us to stay on the cutting edge of musical pedagogy Jeremy Reynolds, associate professor, clarinet

Today the ULA’s endowment provides grants to new faculty members or faculty teaching new classes who need to purchase materials for their courses. Jeremy Reynolds, associate professor at the Lamont School of Music, has purchased hundreds of pieces of clarinet and chamber music thanks to grants from the ULA.

Reynolds says that his students are the direct beneficiaries of the ULA. “Each time I apply for a grant, I always ask my students, ‘What do you want to see in the library?’” he says. “I want to have the best possible collection of music for our students and alums. If these funds weren’t available, I wouldn’t be able to do that.

“After speaking with colleagues around the country, I’m aware of how special the ULA grants are,” he says. “This kind of funding is what enables us to stay on the cutting edge of musical pedagogy.”