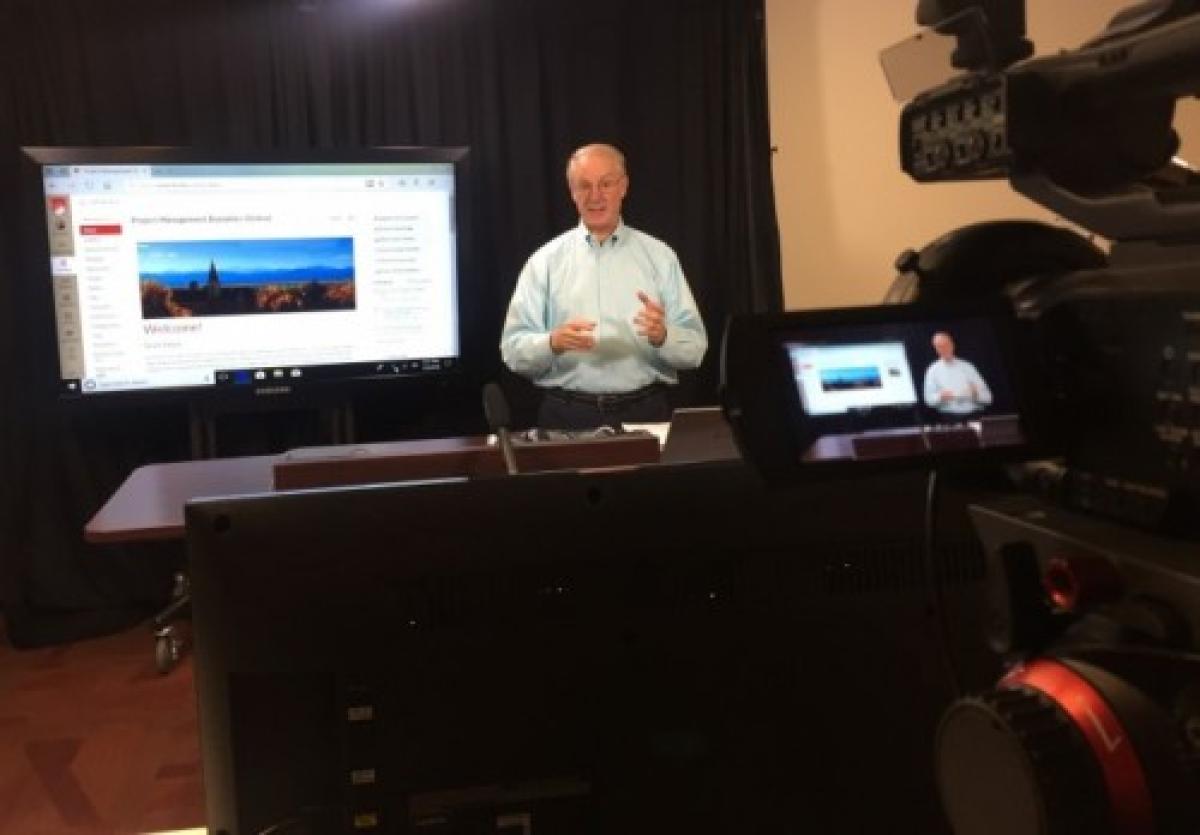 Sitting atop the desk in the University of Denver’s new Video Creation Studio is a button just begging to be pushed. It’s shiny, comically large and framed in a ring of blue light. Enticing though the button may be, the real fun comes post push.

That button allows DU faculty and staff to create high-quality video with ease. A quick push starts a five-second countdown so users can hop in front of the camera in time to start their recorded lecture, kick off production on a welcome video for students or even introduce the latest episode of their podcast. The one-button Video Creation Studio was born out of a concept created at Penn State and later replicated at the University of Colorado Denver. The studio aims to give faculty and staff a high-tech, low-complexity way to produce quality content for a host of uses, from classroom instruction to marketing. It’s as simple as inserting a USB into the studio’s computer, hitting that all-important button and unplugging the USB at the end, already loaded with the ready-to-play mp4 file.

The idea crossed the desks of faculty members in University College, who partnered with IT, the Office of Teaching and Learning and University Libraries to bring the studio to DU. Housed on the lower level of the Anderson Academic Commons, the studio may seem intimidating with its bright lights, large monitor, timer, teleprompter and green screen, but Theresa Hernandez, assistant vice chancellor of campus partnerships in the IT department, says that’s where its strategic location comes in.

“It’s in the AAC for a reason,” she says. “The AAC is a resource for everyone. It’s a place to learn new things and to get assistance when you need it. We have the resources within this building to support all levels of users through a wide variety of services.”

For first-timers and the technology averse, a team of video/media technicians stands by to help with any questions about operating the technology. Once the video is complete, the Digital Media Center right upstairs can help with any necessary postproduction. One of the very first users of the new studio was Allison Friederichs, co-chair of the committee responsible for creating the studio and associate dean of University College. “It’s not like you’re going to walk into this room by yourself,” she says, adding that the technical and creative support helps participants arrive at a final product that exceeds their expectations. “When they see the tangible product that will spur creativity.”

In fact, says Friederichs, her main goal as she considered what the studio could do for DU was to help professors find new ways to deliver content for a 21st-century student body. “Many of our faculty have been with us for a long time, which is fantastic, but sometimes teaching can become old hat,” she says. “Having those neat [tools at your disposal] restarts your own creativity and kind of forces you to think in a different way.”

Creating high-quality content is not just something that can help professors teach better, it also can help students learn better, Friederichs says, pointing to how University College geographic information systems professor Joseph Kerski used the studio’s green screen to communicate visual information in a more teachable way. “They look at things like where various public parks are in Colorado, and then they can compare that to any number of factors like socioeconomic status,” Friederichs says. “He pulls up one of his maps behind him, so he can point to it kind of like a meteorologist and explain things to students. Otherwise, he might just send them to a link and tell them what to look for. This way he can really talk them through it.”

Outside of creating video lectures, the opportunities are boundless. So far, the studio has played host to Chancellor Rebecca Chopp, members of the Advancement team, who created a Star Trek-themed video, and a steady stream of professors experimenting with everything from classroom debates to interviews. “It’s a creative collaboration,” Hernandez says. “It wasn’t a lot of money — it was a lot of good ideas and good intentions. I think we haven’t begun to realize how the space will be used and just how often it’s going to be used.”