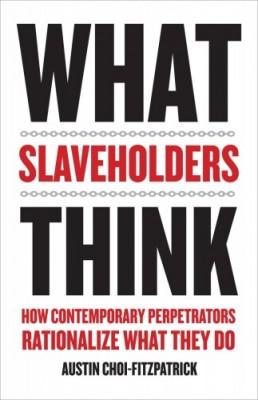 As DU alumnus Austin Choi-Fitzpatrick readily admits, his new book was born in a brothel.

In “What Slaveholders Think: How Contemporary Perpetrators Rationalize What They Do” (Columbia University Press, 2017), Choi-Fitzpatrick draws on extensive field research and time spent on the ground in India. There, while documenting instances of trafficking for sexual exploitation, he sometimes posed as a john. Hence the brothel.

While doing this work, he began puzzling over what became his book’s central preoccupation: What does emancipation mean for perpetrators? With that question in mind, Choi-Fitzpatrick (MA ’03) turned his attention to the issue of bonded labor at farms, quarries and other sites needing people for long hours and backbreaking work. Troubled by this phenomenon, he went on to conduct extensive field research among perpetrators and their victims, completing nearly 150 interviews with laborers, slaveholders, community leaders and informants from social-movement organizations.

Although he knew the problem of bonded labor demanded its own book, it wasn’t until he thumbed through his extensive notes that he asked himself a defining question: “When I went to sit down and write the book, I thought, ‘whose story is not told?’”

A political sociologist at the University of San Diego’s Kroc School of Peace Studies, Choi-Fitzpatrick can list numerous titles chronicling the experiences of victims. “But the perpetrator’s story is not ever told,” he says. “We really have to better understand who these people are. What is really going to make a difference here is not another book about the victims.”

It was Choi-Fitzpatrick’s desire to make a difference that brought him to DU’s Josef Korbel School of International Studies for graduate work. “I wanted to study human rights from a social science perspective,” he explains, noting that he didn’t want to take the more common path — law school — open to people interested in the topic. “The law’s important! But I went to Korbel because I wanted to spend my life among people, not just books or the courtroom,” he says.

People are very much at the heart of “What Slaveholders Think.” Although the victims are never far from center stage, the leading roles belong to the men and women — many of them stalwart members of their communities — who qualify as slaveholders and “everyday oppressors.”

“Formal ownership is a thing of the past,” Choi-Fitzpatrick says, “but modern slavery persists through the absolute control the powerful have over the lives of others.” In fact, modern-day slaveholders often market loans to vulnerable people, use violence and coercion as a deterrent, and oversee working conditions that are dangerous and dirty.

According to the terms of bonded labor, workers toil away to pay off money advanced for any number of reasons — perhaps to provide a bride’s dowry or pay family medical bills. Too often, laborers find that, despite years of servitude, their debt is growing, not shrinking, because charges for food and shelter are tacked on their original obligation. In one instance cited in Choi-Fitzpatrick’s book, a boy worked for almost five years to pay off a debt that translates to just $20.

“Some of them did not think they were doing anything wrong,” he says. “What surprised me most is how ordinary people justify extraordinary behavior.”

The justifications typically employ what Choi-Fitzpatrick calls “paternalistic arguments.” Slaveholders often think they are performing a community good, providing work, food and even shelter to people who otherwise might not have them. In perpetrators’ minds, they also are making significant contributions to the local and national economies.

Choi-Fitzpatrick hopes his book will be of use to policy makers and development groups attempting to address slavery. Both, he says, should understand how context creates and sustains the problem, how law-enforcement efforts might leave victims and communities additionally vulnerable, and how development and anti-poverty campaigns might inadvertently support human rights violators.

He credits Professor Jack Donnelly, known worldwide for his groundbreaking work on the theory and practice of human rights, with inspiring what he calls his “ditch-the-dichotomies” approach to scholarship — an approach that shuns a simple “good vs. evil” interpretation of facts.

“Jack Donnelly once told me to always turn dichotomies into continuums. … Most of what’s real about life happens along the continuum,” he says. “That advice has never left me, and it is the animating spirit behind this book.”

All royalties from “What Slaveholders Think” will be donated to advocacy groups Free the Slaves and Anti-Slavery International.

Austin Choi-Fitzpatrick will be on the University of Denver campus in early April to serve as a professional in residence and to conduct a research workshop. He also will deliver a talk — "Dude, Where's My Privilege? What Modern Slaveholders Tell Us About Today's Politics” — for the campus community from noon-1:30 p.m. April 6 at the Sie International Relations Complex, Room 1020. In addition, he will discuss his new book at 7 p.m. April 5 at the Tattered Cover Bookstore in Lodo.