A Woman, a Camera and a Mission to Improve the World

When Dayna Reggero was younger, she was a talker.

The University of Denver alumna took every opportunity to put her face on TV or get her name in the newspaper as she fought to protect the environment.

Now, at age 37, she’s figured out it’s even more powerful to listen.

“We've got to care about our neighbors now,” Reggero says. “Nobody's listening to their stories. That's what they tell me: ‘You're the first person to come here.’"

For years now, Reggero has relished her trips across the country, documenting real people dealing with the real effects of pollution and climate change in what she has dubbed the Climate Listening Project.

In California, she introduces viewers to worried mothers, afraid of how a historic natural gas leak will affect their children’s health.

In Pennsylvania, she visits families fearing the gas and hydrofracking wells just beyond their fence lines.

Reggero’s love for the environment goes back as far as she can remember. She was a vegetarian at age 12. By 19, she was appearing as a spokesperson on TV with local and endangered animals. But years after attending the University of West Florida and focusing on communications, she felt unfulfilled.

“It really gave me the expertise or the drive to listen more to really try to understand the science behind everything,” she says. “To understand what policies are in place and how policy works.”

I try not to try to convince anyone that climate change is real. I just try to show the real people and their stories. Dayna Reggero

Instead of a room of environmentalists, she was surprised to find students from diverse fields who were impacted by the same issues she cared about. The interdisciplinary perspectives she encountered tied everything together and showed her ways entire communities can get involved.

Rather than stay on campus, Reggero finished her degree online, traveling with a camera to document the personal stories of climate change.

“There’s this sort of idea that it’s not as bad as it seems out there, that the climate change impacts are coming in the future, that what we’re doing is not hurting our communities,” she said. “Unfortunately, that’s not true.” 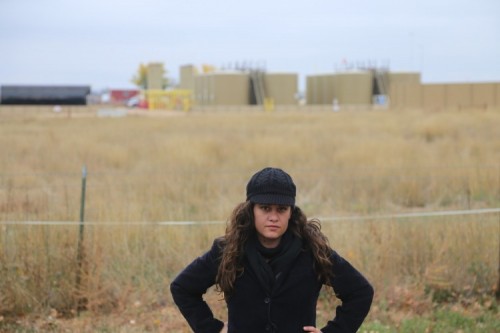 Reggero spreads the word through her work, which she provides and distributes for free online. Partnerships with other environmental organizations, freelance work and speaking engagements have helped pay the bills.

The work has paid off. But though her work has garnered awards from international film festivals, Reggero shies away from the spotlight. She is still reluctant to do interviews. She’d rather give the attention to her subjects and their challenges.

“These stories are just a few that maybe can show people that they’re not alone,” she says. “This is happening, but there is hope. And [I hope to] inspire others to share their stories as well and take action in some way.”

And if Reggero has learned anything through her lifetime of environmental service, it’s that actions and images often speak louder than words.