Head coach Christian Thompson said this year both players “blossomed into mature, smart players, and it showed in their consistent results throughout the year.”

The teammates, roommates and close friends also made it to the quarterfinals of this year’s NCAA doubles tournament. That’s the deepest run of any tandem in DU history. Their final ranking was an impressive 13th among all NCAA Division I women’s doubles teams.

The just-graduated Slattery also was named Summit League player of the year. O’Loughlin, a senior, made the All-Summit team and now takes the reigns as captain of a talented team that no doubt will seek more glory at the national level next season.

The two recently shared their thoughts with Jason Evans, a DU alumnus and Atlanta alumni chapter president who frequently contributes to the DU Newsroom. Here is a portion of that interview. 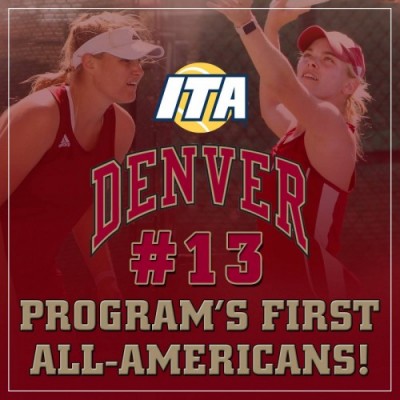 DU Newsroom: Starting with the obvious, how does it feel to be the first All-Americans in DU women's tennis history?

O’Loughlin: It feels amazing. Being All-American was one of my goals coming into college and accomplishing it, [being] the first one with Maureen, I'm just really truly so grateful that I had the opportunity to do that in my college career.

Slattery: There was so much support and emotion behind it. It was overwhelming at first, but now that I have had more time to process it, it's such an amazing accomplishment. When I first came in, it seemed like an impossible feat, and then this year we basically knew from the beginning it was going to happen. How it happened (while competing in the NCAA tournament) was pretty awesome.

DU Newsroom: Julia, for those who aren't familiar with your story, you were discovered very early on by the United States Tennis Association (USTA). For your age ranking, you were the top player in the country at 12 years old. What do you think it does to find success like that at such a young age?

O’Loughlin: I think for the most part it’s a very good thing. It gives you confidence going into college and knowing what you’re capable of, and a lot of times you’ve already been put on big stages. I really think that helps in college; you have a little more of the experience going in.

DU Newsroom: Maureen, you were recruited by pretty heavy names like Brown and Princeton. Why DU?

Slattery: I get that question all the time when I tell people that I was recruited by the Ivy League. Education has always been really important in my family, and I think that’s why I considered the Ivy League so heavily, but I realized that I wanted to be on a team where tennis was going to be a priority, and it was not just going to be second to academics always like it would be at an Ivy League school. I really felt like I connected with Christian [Thompson] when I first met her — she was the assistant coach when I got recruited. She had big goals for me, and I kind of felt attracted to that. 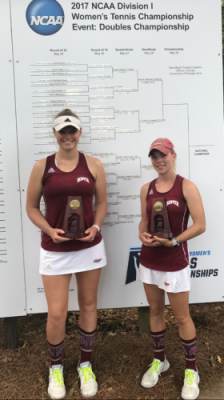 DU Newsroom: Besides your Irish heritage, what would you two say that you have in common?

Slattery: I personally think we’re both competitive with each other, with other people, basically in every situation possible. I think that’s why we came together so well, because we were both so passionate about winning and being the best and making history. I feel like as soon as we had one good tournament, we were like, all right, let’s do this, let’s go all the way.

O'Loughlin: The competitive part I definitely agree with. I just think we really click. We’re not just doubles partners on the court; we were put together obviously from the very beginning, but we’ve really become close friends off the court as well. We live together, we’re roommates — that's added another element to why we’ve been so successful.

O’Loughlin: I think just having absolute trust in your partner is very important. I think trust each other equally, like if any of us have ideas on what we need to do on and off the court. We never doubt each other; we know exactly what the other is going to do. Just trust is the biggest thing that I can think of.

DU Newsroom: Maureen, as you move on, what lessons do you think you’re going to take into life from playing college tennis?

Slattery: I think I learned a lot about myself, especially being a leader. I’ve been the captain the past few years, and I feel like it has given me so much room to be able to develop leadership skills. I feel like this will help me succeed and achieve my goals.