Dan Linseman works with students to study ALS and Alzheimer’s 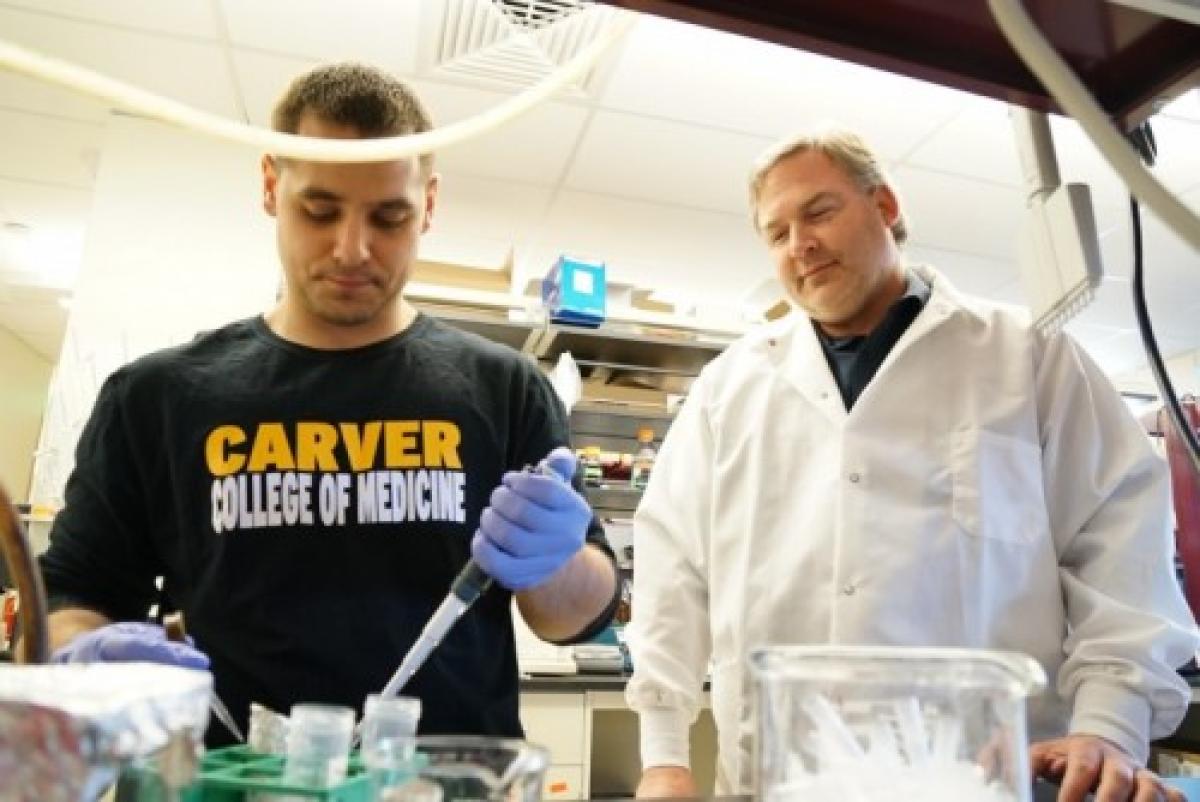 In a lab at the University of Denver, sophomore Cassidy Anderson is busy experimenting with pyrroloquinoline quinone, a compound found in green tea, peppers, and certain fermented foods. PQQ, as it is known, has the potential to protect brain cells against the damage that causes neurodegenerative diseases such as amyotrophic lateral sclerosis (ALS, also called Lou Gehrig’s) and Alzheimer’s.

“It’s really cool to see the science behind what we learn in class,” says Anderson, who hopes to attend medical school. “And as a doctor someday, I’ll better understand the mechanisms behind diagnosis and treatment.”

Anderson works in the Linseman lab, where there’s rarely a dull moment. Led by Dan Linseman, a professor in the Department of Biological Sciences and Knoebel Institute for Healthy Aging, a team of undergraduate and graduate researchers is trying to determine how nutraceuticals — food components used for medicinal purposes — might protect the neurons in the brain that underlie neurodegenerative diseases. The researchers have looked at coffee, green tea, strawberries, blackberries, rosemary, dark chocolate and more in the search for neuroprotective properties.

“We’re looking for compounds from natural substances that protect against inflammation and neural death, which are two underlying causes of neurodegenerative disease,” Linseman explains.

For the 16 undergraduate students who work in his lab, it’s an invaluable opportunity to gain hands-on experience exploring real-world problems, serving as excellent preparation for pursuing graduate and medical degrees and embarking on professional careers.

“The students come in new to everything, but by the time they leave, they are seasoned undergraduate researchers with a real notion of what it means to do basic research,” Linseman says. “I like seeing students excited about the research and feeling like they are contributing.”

Linseman has published numerous papers over the years with his undergraduate researchers and has paved the way for them to attend scientific conferences and symposiums. They’ve even had the chance to interact with ALS patients, giving them a look at the human face behind the drive for medical treatments.

For senior Lilia Koza, the human side resonates strongly. “I worked in a nursing home throughout high school, so healthy aging is important to me,” she says. “It’s something that everyone has to face.”

A biology major with a concentration in cognitive neuroscience, Koza fell in love with research after she began working on nutraceuticals in the lab last year. She plans to pursue a doctorate after graduating from DU.

“What I like about research is going out on a limb and finding niche projects,” she says.

Todd Savolt, a senior biology major, is testing compounds from dragon fruit to see if they protect neurons from inflammation and stress that leads to cell death. He plans to attend medical school next year.

“The best part of working in the lab for me has been to take what I learn in class and apply it,” he says. “And it’s helpful when applying to medical school to show that you have practical experience.”

Linseman says that strawberries and blackberries are proving to be particularly promising in the search for neuroprotective properties. Anthocyanins — the chemicals that give berries their rich color — act as antioxidants inside the body and ward off disease. He recently published a paper in Free Radical Biology & Medicine analyzing how two different anthocyanins found in strawberries and blackberries might function as therapeutic agents.

In December 2016, Linseman received a $50,000 gift from the Ralph L. Smith Foundation. The gift will help him and his team continue investigating possible treatment paths for neurodegenerative diseases, particularly ALS. And it will ensure that more students continue to benefit from research opportunities that launch careers in science.

Aimee Winter is a great example. She began working in the lab as an undergraduate and stayed at DU to earn a doctorate in cell and molecular biology. She’s now heading to a postdoctoral appointment at the University of South Florida.

“Working in the Linseman lab has been a great experience and has helped open doors for me,” she says. “Dan is a great mentor who takes time to help students examine what’s best for them and determine how to get there.”

A core mission of DU’s Division of Natural Sciences and Mathematics is to offer students unprecedented access to research opportunities. By working alongside distinguished faculty mentors in state-of-the-art facilities, undergraduates and graduates are able to apply their newfound knowledge to research that changes lives and challenges ideas. 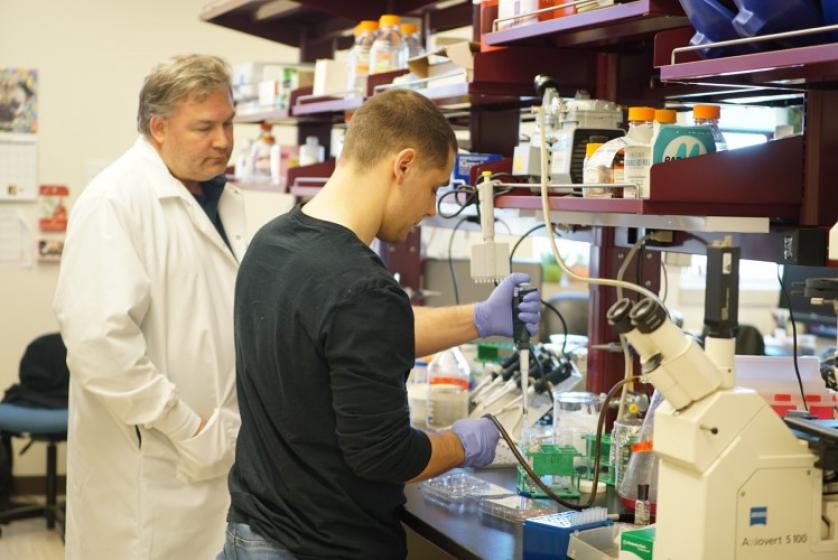 Dan Linseman works with Todd Savolt in his lab. 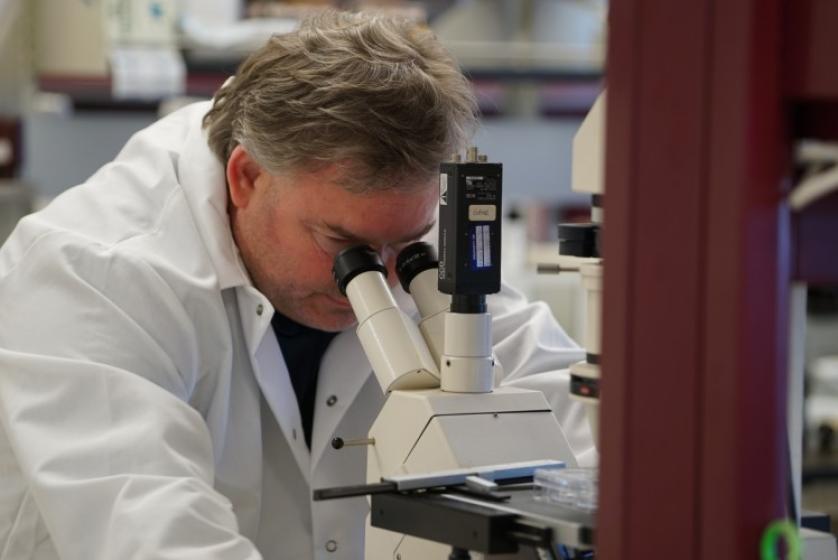 Dan Linseman works with undergraduate students in his lab. 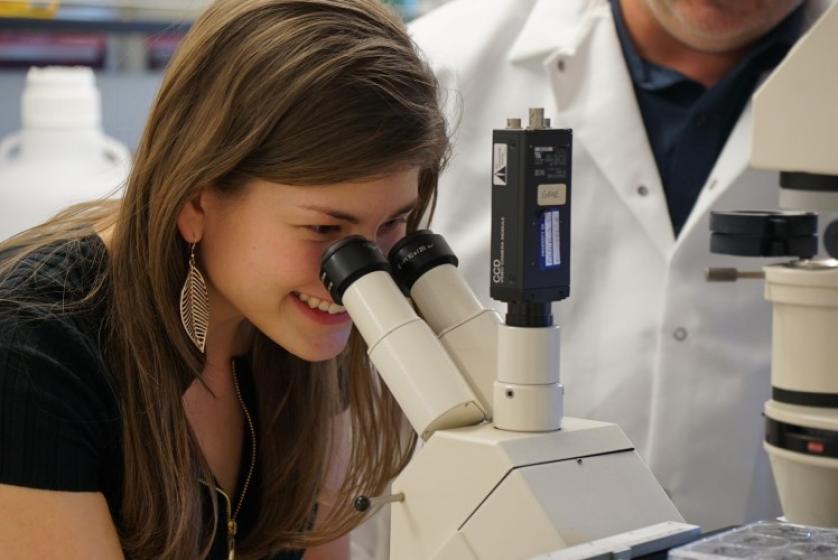 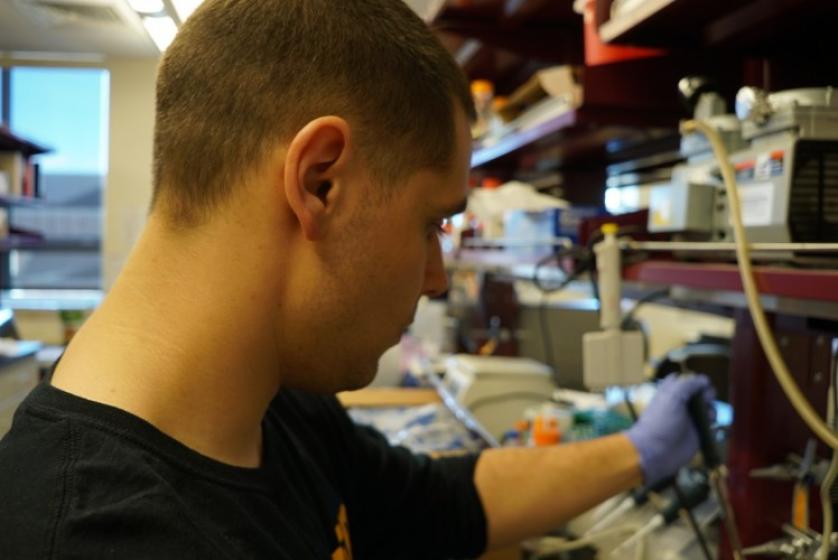 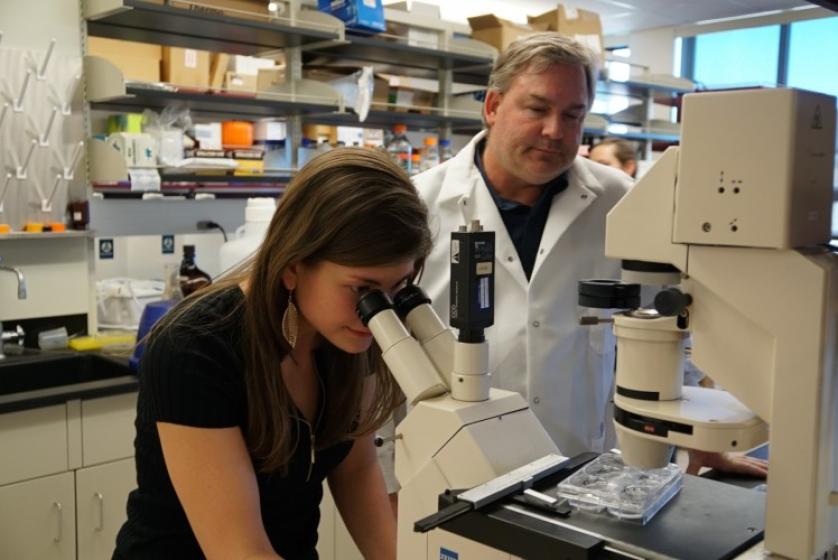 Dan Linseman works with Lilia Koza in his lab.