In a lab at the University of Denver, doctoral student Whitley Lehto is eagerly helping parents mess up their kids' lives. Fortunately, the drama is confined to an aquarium as her subjects are fish.

In June, Lehto's research got a boost when she was awarded a National Science Foundation Doctoral Dissertation Improvement Grant, making her the first student in DU's Department of Biological Sciences to receive the award. She'll now be able to take her three-spined stickleback fish research to the next level, looking at epigenetics – modifications to DNA that are independent of changes in genetic code and that may influence gene expression.

Evolutionary biologists love to study stickleback as the fish, which are found widely across the northern hemisphere, serve a model organism for shedding light on the genetic changes involved in adapting to new environments. Researchers have documented the details of sticklebacks' elaborate breeding behavior and have even sequenced their genome.

Lehto, who works in Professor Robin Tinghitella's lab, is looking at how exposure of stickleback parents to predators affects the mating decisions of female offspring who've never encountered predators themselves. 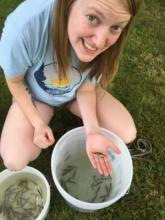 "Work like this can give us some insight into the future of populations in the face of human-caused environmental change.” Whitley Lehto Department of Biological Sciences

"The research is unique in that no other study has integrated the independent contributions of both mothers’ and fathers’ own experiences on offspring characteristics, and none have looked at offspring mate choice," Lehto says.

Stickleback have a well-characterized breeding system. Males build nests and attract females to those nests with a courtship dance and bright red coloration on their throats. Females lay eggs, after which the males guard the nests and care for the young.

The fact that parents modify their behavior in the presence of predators may influence the mate choices of their offspring, according to Lehto. Her preliminary data show that female offspring of fathers exposed to predators avoid males with brighter red throats – a quality that might attract unwanted attention from predators.

The next step in her research is to look at epigenetics – specifically, how environmental stressors on parent fish, such as exposure to predators, could change their offspring’s gene expression on a molecular level and mate choice on a behavioral level. In short, the life experiences of the parent fish, in addition to their genetics, could shape their offspring’s mating behavior.

"Work like this can give us some insight into the future of populations in the face of human-caused environmental change,” Lehto says. “When the environment changes rapidly, sometimes adaptation from evolution cannot keep pace, but epigenetic changes are a way that populations can respond positively without changes to their DNA.”

Lehto was first introduced to stickleback research while working as a research assistant at Michigan State University as an undergrad. "There are certain topics that you hear about in courses and cling to, and when you gain some experience in research, it’s hard not to be curious and start asking your own questions," she says. "This is a fun study because nobody has ever done it."