For a DU staffer and grad student, music is literally her life 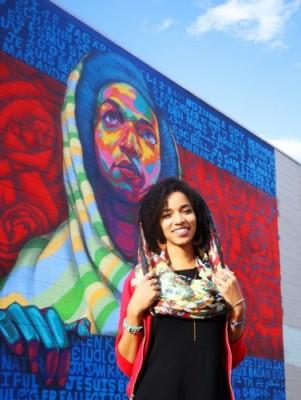 On an unseasonably warm evening in December, DU grad student and staffer Tanya Salih stands backstage at a Denver bar, wearing a shimmering gold headdress. Henna climbs her arm like a vine.

Confident, poised, proud. The crowd knows her as Zanib. A violinist, vocalist and songwriter ready to own an identity she attempted to hide for so long.

The name Zanib, which loosely translates to “growing dreamer,” comes from Salih’s parents. It’s her middle name, though her high school classmates made her wish it wasn’t.

“They made such a big deal out of it,” recalls Salih, a program coordinator at the University of Denver’s Barton Institute for Philanthropy and Social Enterprise. “I didn't want to hear people slaughter my name and ridicule me for it, so I just kept it under wraps.”

The discomfort was inescapable when Salih was growing up in Cheyenne, Wyo., where nearly nine-in-10 people are white. The daughter of immigrant parents from the African region of Nubia got used to sticking out. She remembers feeling different, caught between cultures, leading a double life.

At home, she spoke Arabic and listened to recorded readings of the Quran. (Her father is an imam, a leader in a mosque.) Once she stepped outside, she was just like every other kid, trying to fit in and find her own path.

I feel like the stage is such a sacred place. Being an artist and a performer is a very vulnerable place to be, because you're sharing a piece of your soul or your emotions with people you may or may not even know. So in that space I'm just inviting people to come and let their guard down so they open up to what I'm saying. Tanya Salih

It’s different on stage, where cultural influences converge. Between songs, she tells the crowd about the importance of understanding and loving people for their differences.

“People can't silence your voice when you’re on stage,” she says. “That’s when you have people’s attention. You can say what you need to say and the people are listening.” 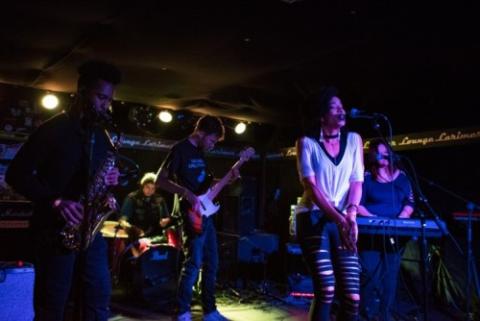 Salih’s musical roots trace back to the fourth grade, when she picked up the violin her older brother put down. A couple of years later, she was singing in the school choir.

But she had never considered performing until after college, when a friend invited her to perform with him at a little place in her hometown. The audience was wowed. Her career had begun.

She started writing poetry, picked up the ukulele and began writing songs. But she wanted to do things differently.

“People don't realize: You’re absorbing [music], consciously or not. It will affect you,” Salih says. She remembers mindlessly singing along to pop songs in the car before realizing “[the lyrics] were something so degrading and something that didn't resonate with any of my values, but I was singing it, and I wasn't even realizing it. I just really had a shift to become more intentional with my music.”

Getting to know Salih’s music is getting to know the woman behind it. Rather than exploring romance or her social life, she sings about her culture, travels and values: unity and understanding.

They are the same tenets of her work at the Barton Institute, where she coordinates projects that help the homeless, women recently released from prison and technical school students, among others.

“My mission has always been about the people, and I feel like Barton is very much about that,” she says. “Barton has helped me see the value of social enterprise and finding the need in the community through the people in the community.”

After she completes a higher education degree in the Morgridge College of Education, she wants to use music to teach, a combination that allows her to engage with bigger issues. “I love doing the community work because it helps me stay rooted and stay aware,” she says. “I feel like if I just did music, I would be isolated from the experiences that help me understand the world I'm living in.”

Back at the bar in Denver, Salih is ready to step into the spotlight and debut her latest release: an Arabic-covered EP titled “Salam,” or peace. Each song, she says, blends soul, classical, reggae, old school, R&B and funk.

It is diverse and it is different. But so is she.

And as she sings on this night, Zanib wants to celebrate that she always will be.