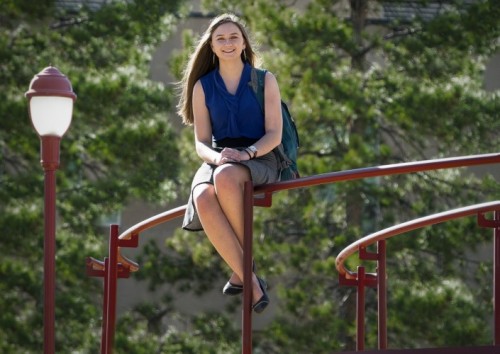 University of Denver alumna Ashlyn Stewart (BA ’17) has been named one of four national winners of the 2017 National Collegiate Honors Council (NCHC) Portz Scholars Thesis Contest. Stewart, who graduated in June and majored in English and history, was part of DU’s Honors Program. Her thesis is titled “Creating a National Readership for Harper’s Weekly in a Time of Sectional Crisis.”

College and university honors programs across the country were allowed to nominate one undergraduate student per institution for the award. This is the second time a DU student has been named a winner of the contest.

“This award means a lot to the individual student. It is a great addition to their scholarly resume and strong graduate school application,” said Shawn Alfrey, associate director of DU’s Honors Program. “A number of honors students were recommended for this honor by their thesis advisors, and we selected Ashlyn as our nominee for the quality of [her piece’s] analysis, creativity research and writing. Ashlyn’s interdisciplinary thesis was mentored by advisors Susan Schulten and Tayana Hardin, and we are grateful to them for their support of Ashlyn’s work.”

As part of the award, Stewart will make a presentation about her thesis at the annual NCHC Conference in Atlanta in November. She also received a $350 stipend, and the NCHC Portz Fund Committee is paying her conference fees.

“I’m honored to receive an award that recognizes both the work I put into my thesis and the institution that supported me in the endeavor,” said Stewart, who is from Salida, Colo. “The fact that I am one of only four recipients indicates to me that DU does an outstanding job of supporting undergraduate research. Without the help of Dr. Schulten and Dr. Hardin — as well as my research methods instructors, readers and committee members — I wouldn’t have been able to produce my project.”

For her thesis, Stewart focused on an interdisciplinary topic that covers English and history. It was important, Stewart said, for her to focus on work from the late 19th century, since American literary work and that particular historical period are of great interest to her.

Following preliminary research, Stewart and Schulten, professor in and chair of the Department of History, realized that much of the literature Stewart wanted to study was in magazines, not books. From there, the two started looking at periodicals from that time.

“I became enamored with Harper’s Weekly because of its wide range of fiction and nonfiction, political news, editorials, illustrations and cartoons,” Stewart said. “Harper’s Weekly was founded in 1857, the same year that the sectional crisis gained momentum with the Dred Scott decision, which meant I had the serendipitous opportunity to look at how a national periodical and a national conflict grew and evolved alongside each other. I became interested in how the periodical attracted, retained and appealed to its national readership throughout the conflict and decided to make that question the main inquiry of my thesis.”

Stewart plans to apply to graduate programs in English this fall and start a master’s or doctoral program sometime next year. Her studies will be similar to her thesis, focusing on the creators and arbiters of 19th-and 20th-century American literature. Once she’s done with school, Stewart would like to work in a library, in an archive or at a university.