Impact of Wildfires After the Flames

The 2016 wildfire season is off and running. Fires are making headlines across the west, from drought-stricken southern California to right here in Colorado. There currently are five wildfires burning across the state, none more threatening right now than the Cold Springs Fire in Nederland. It already has burned several homes and triggered the evacuation of nearly 2,000 people. Many more are being urged to prepare for an evacuation. 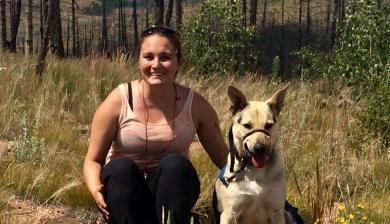 For Laurel Cepero, who’s earning a master’s degree in Professor Shannon Murphy's lab in DU's Department of Biological Sciences, wildfire gets interesting long after the flames are extinguished. With the help of a National Science Foundation (NSF) grant, Cepero is studying the influence of wildfire disturbance on food chains, zeroing in on how insect communities are impacted by both the severity of a fire and the length of time since the burn.

“I wanted to work on a locally relevant issue,” Cepero says. “We already have an idea of how fires affect plant diversity, but less of an idea of how they affect everything else in the ecosystem.” 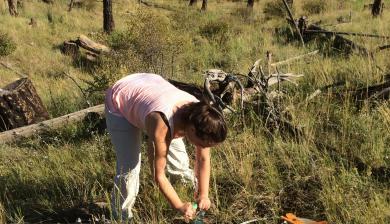 “Different groups of insects seem to be responding differently depending on the level of burn severity,” Cepero says, noting that she attributes this to vegetation changes at burn sites. “I'm hoping to tease apart the relative impact of severity and time since fire on the recovery of the burn site.”

Cepero’s research is unusual in that she’s studying the insect community as a whole, rather than focusing on just one insect. “I'm especially interested in how fires affect food chains and food chain interactions,” she says.

The research also has practical implications for land management, especially with climate change expected to increase both the frequency and severity of wildfires. “Right now, land managers remove burn fuel from forests,” says Cepero, who plans to share her research results with Pike National Forest. “But it’s possible that a high-severity fire promotes more biodiversity in the long term. Knowing the impact of fire severity on overall diversity is very valuable for land managers.”