An increase in naturalization applications is consistent with past election years

Time is running out for permanent residents to apply for U.S. citizenship. That’s what some groups would like you to believe with only four months until the presidential election. They’re peddling the fear that, if elected, Donald Trump, the Republican Party’s presumptive nominee, will change laws and shut down the nation’s borders, preventing immigrants from moving to the U.S.

A Washington Post article in May added fuel to the fire. In the story, Democrats suggested that Trump’s proposed policies on immigration would create a “surge” of new citizens that would lead to Hillary Clinton getting elected.

“I don’t think there is actually a demonstrable historical surge,” says Thomas Nail, a professor of political philosophy at DU’s Divisions of Arts, Humanities and Social Sciences. “What’s interesting is the rhetoric that is coming from both sides on this issue.”

Nail’s assessment aligns with the latest figures from U.S. Citizenship and Immigration Services, the government agency that oversees lawful immigration to the U.S. Thus far in 2016, nearly 450,000 applications for citizenship have been received. In 2012, leading up to the last presidential election, 412,000 applications were submitted. 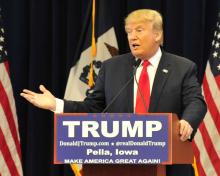 “With respect to elections and the rhetoric, at some point it doesn’t even matter what is the case, it comes down to what people will believe,” Nail says. He argues that a big part of the rhetoric comes in the use of the word “surge.”

“This word is not a neutral word, and it carries connotations when you use it to describe human beings; it means they’re a negative flow.” Now both parties are using the “surge” in citizenship applications to their advantage.

For Republicans and Trump, Nail says, the suggestion of a surge testifies to his true power. “They are saying, ‘look at how powerful Trump is that he can actually mobilize these people against him.’”

That same perception of power is being used by the Democrats and their nominee, Hillary Clinton. “They are saying ‘she is bringing new people to the polls. This is more evidence that Clinton is going to win because she is getting new voters.’”

One of the largest recent spikes in citizenship applications happened in 2007. While it was right before an election year, the surge had nothing to do with the candidates. Rather, the spike happened because application fees were about to increase from $300 to $595.

The current increase in citizenship applications, and even voter registration, should be expected in the months before an election. “I think it’s totally normal that there would be an increase in these years; that just makes sense,” Nail says. “I just don’t think anything historically dramatic is happening right now.”