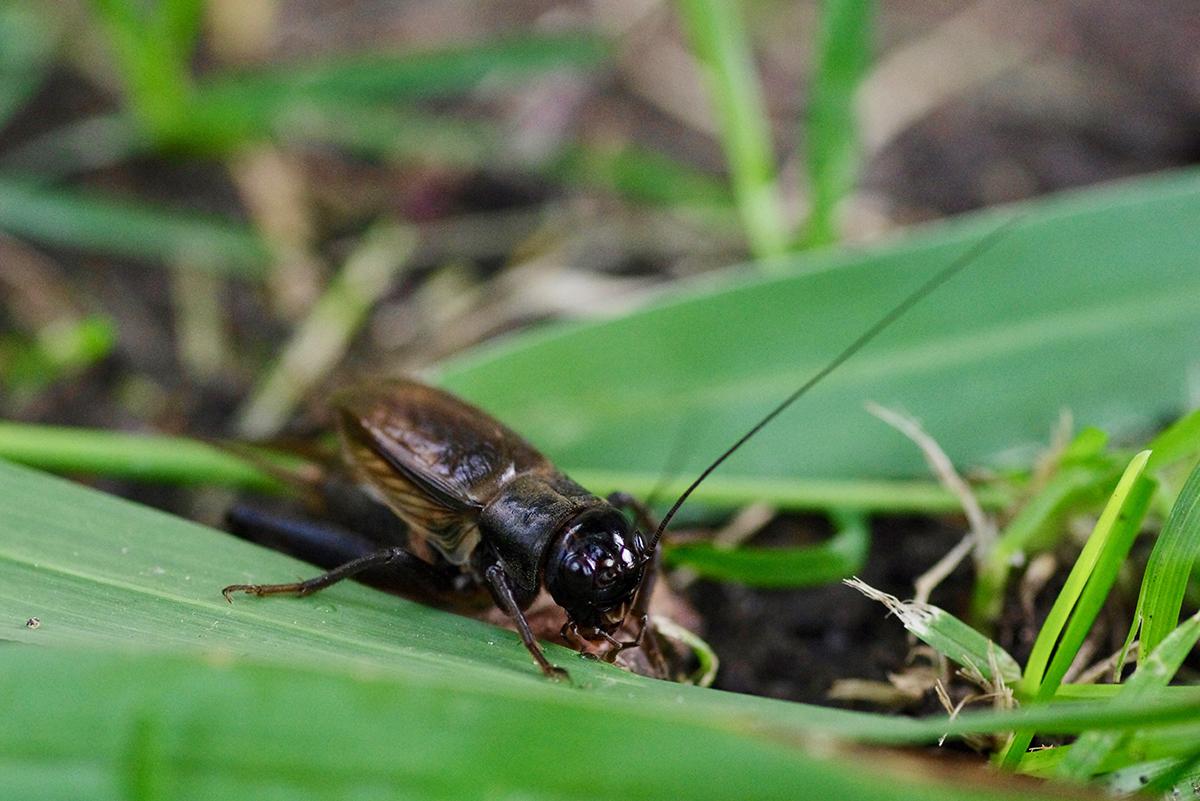 There’s something special about city birds.

It’s not their round bellies or their pushy attitudes, but rather the pitch of their sweet songs. Hoping to be heard above the din of metropolitan living, these birds have adapted to sing a higher note than their rural cousins as a result of what’s called anthropogenic noise. And they’re not the only species affected by this phenomenon.

Crickets, it turns out, also feel the impact of city clamor. From the roar of traffic to the steady hum of appliances, anthropogenic noise is ever present and poses a potential threat to the animals around us.

A new grant from the Morris Animal Foundation will allow Robin Tinghitella, an associate professor in the University of Denver’s College of Natural Sciences and Mathematics, to better understand the effects human-generated noise has on crickets, an important invertebrate that plays a key role in our ecosystems. This work’s potent combination of conservation biology and behavioral ecology caught the foundation’s eye, despite its usual focus on companion animals.

“These are real impacts that could affect the health and wellness of an organism (crickets) that plays an important role in food webs,” Tinghitella says. “To understand how that might scale up to impact other organisms, we have to first understand how it’s impacting those invertebrates who are being eaten by everybody else.”

Tinghitella’s research builds on a study conducted by a former DU graduate student in her lab, Gabrielle Gurule-Small. That work considered how anthropogenic noise might disrupt communication between crickets seeking mates. Gurule-Small’s findings begged for follow-up studies: When exposed to noise as juveniles, female crickets took 80% longer to locate singing mates, and their development to adulthood took 23% longer.

Today, Tinghitella and her team are hoping to understand not just the mechanisms behind the impacts of anthropogenic noise, but also the intricate details of how it might harm crickets.

“We wanted to move beyond that effect on communication to understand how noise might be a more general stressor that can impact things like their ability to launch an immune response and their fertility,” Tinghitella explains. “That’s what brought us to the Morris Animal Foundation, because their interest is really in the health and welfare of animals.”

Over the course of the three-year grant, Tinghitella’s lab will raise multiple generations of crickets under different noise conditions. Researchers will observe and measure a number of variables over the span of the crickets’ 3- to 4-month lifespans to determine how anthropogenic noise alters their fitness.

Former DU student and current lab tech Sophia Anner is part of the team studying the intimate lives of participating crickets. Armed with a detailed cricket calendar, she and other team members will first measure how many times each cricket fails to mate before finding success. The researchers will then conduct a male-specific trial aimed at determining whether noise affects the insects’ fertility by measuring the proportion of live sperm to dead sperm, Anner explains.

From there, the team will assess each cricket’s immune response by counting the number of immune cells (hemocytes) in their hemolymph (the insect equivalent of blood). The more hemocytes, says PhD student Gabrielle Welsh, the higher the cricket’s immune response. Crickets also have filaments placed in their bodies that mimic one of its natural predators, a parasitoid fly. As the crickets’ bodies launch an immune response to this foreign object, the filament turns black, and researchers can measure this color change.

Tinghitella hopes this groundbreaking work will help humans better calibrate their interactions with their surroundings. Already, she has reached out to the Jefferson County park system, as well as the National Park Service’s Natural Sounds and Night Skies Division.

“If we were able to make changes in the amount of disturbing noise we allowed in parks, for instance, and we remove that stressor, are [crickets] actually able to come back from that?” Tinghitella asks. “I think from a practical perspective, we will actually learn things we can communicate with land managers who can make a difference in the ways these populations are managed over time.