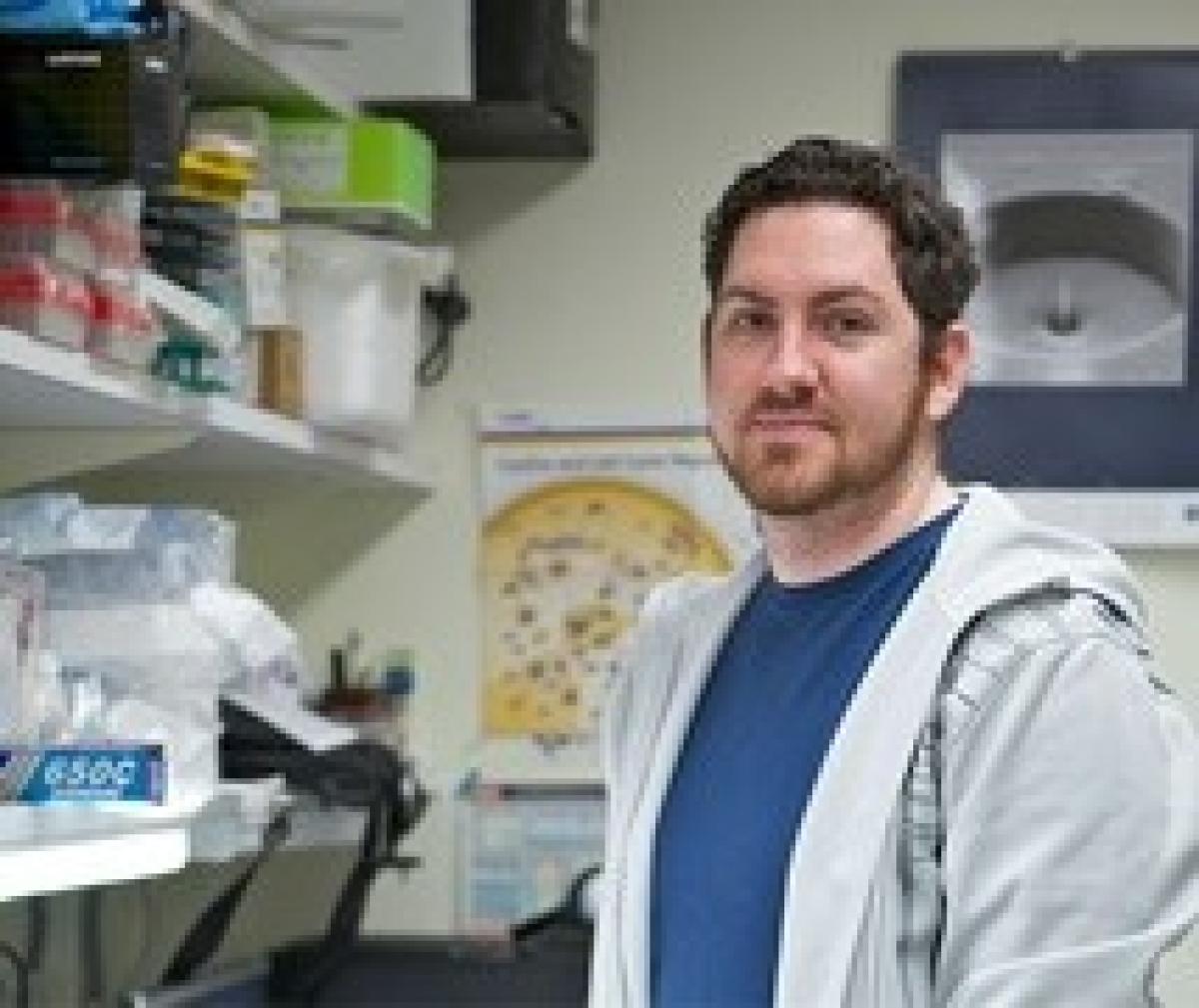 In a lab at the University of Denver, Schuyler van Engelenburg peers inside a sterile hood.

An assistant professor in the Department of Biological Sciences, van Engelenburg is at work in his tissue cell facility, a closet-sized space that contains an incubator for culturing cells and a hood for manipulating them.

The facility is central to his research goal: to help devise a new, safer method for delivering corrective genes to children suffering from genetic blood disorders.

My hope is that the viruses we develop can someday lead to the safe treatment of genetic blood disorders. Prof. Schuyler van Engelenburg, Department of Biological Sciences

"I feel very honored that the Boettcher Foundation selected me for this award, as I now get to aim my research in a new direction," he says. "My hope is that the viruses we develop can someday lead to the safe treatment of genetic blood disorders."

The award will support research that potentially could help children with Severe Combined Immunodeficiency Syndrome (SCID), a rare, inherited disorder of the immune system caused by defects in white blood cells. It occurs when a mutated gene or deficient enzyme creates defects in the cell responses, leaving patients vulnerable to deadly infections.

In 1990, SCID became the first human illness to be treated by gene therapy (the replacement of a defective gene with corrective genetic material) when doctors transferred normal genes into the white blood cells of two young patients. Gene therapy for SCID has met with many difficulties, however, including patient fatalities.

As a Boettcher Investigator, van Engelenburg will focus specifically on improving the viral vectors—tools used by molecular biologists to deliver genetic material into cells—that are used to deliver corrective genes to immune cells. He hopes to combine next-generation virus particles with novel technology for genome editing—the practice of inserting, removing or replacing genetic material within the genome of an organism.

"Viruses are a great conduit for transferring genetic material," he says. "The idea is to engineer the virus to do the heavy lifting for us and watch it deliver corrective genes to a specific place in the human genome."

Cellular biologists such as van Engelenburg are abuzz over a new technology, CRISPR, that allows scientists to edit genomes with unprecedented precision, efficiency and flexibility. The powerful tool has the potential to transform the field of cell biology.

"It's really exciting that we have new technologies that allow us to think of something that we want to do on a cellular and molecular level, and then go into the lab and readily accomplish that goal," van Engelenburg says.

One of the benefits of the Boettcher grant is that it will allow him to expand his cell culture facility to work with more clinically relevant cells. It also will give him the opportunity to network with other Boettcher Investigators and serve as a mentor to undergraduate Boettcher Scholars interested in biomedical research techniques.

“I’m tremendously excited about the potential impact Schuyler’s research will have on treatments of difficult diseases," says Corinne Lengsfeld, associate provost for research. “The award is a wonderful acknowledgement of DU and our talented faculty."