They are also the perfect subjects for scientists wanting to study the mechanical forces that drive living cells. Dinah Loerke, a biophysicist in DU’s Department of Physics and Astronomy, belongs to a team of researchers that is taking a close look at epithelial tissues in sea squirts. Because these same tissues line the organs, cavities and blood vessels of human bodies, the research has implications for medical challenges such as cancer and wound healing.

“If we can understand how epithelial cells function mechanically in sea squirts, we expect that even though this is very basic research, it could ultimately produce insight into medically relevant issues in human beings,” Loerke says.

This experiment with the sea squirts will potentially allow us to see — and therefore analyze — mechanical processes that aren’t easily visible in other systems. Prof. Dinah Loerke Department of Physics and Astronomy

To carry out the experiment, the team adds chemicals that modify the mechanical properties of cells to the water in which the sea squirts are growing. They then carefully observe and measure small changes in cell extrusion, allowing them to form testable theories on the mechanical forces that underlie such changes. 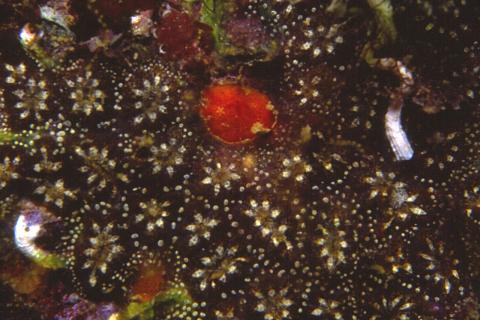 The research is important because epithelial cells are ubiquitous throughout the human body, forming layers on the surfaces and linings of organs and cavities. The vast majority of cancers are carcinomas, which are cancers of epithelial cells. Cancer transformation in these cells is accompanied by very specific mechanical changes.

Epithelial cells are also critical for wound healing, which requires cells to migrate into a gap left by a wound, as well as for barrier function, in which layers of connected cells must adhere to each other tightly enough to prevent undesirable molecules from diffusing across the layer.

Loerke will bring her expertise in image analysis to the team. “I am always really excited to see live-cell movies where you can literally watch a tiny cell or organism do something important under the microscope, sometimes in real time,” she says. “This experiment with the sea squirts will potentially allow us to see — and therefore analyze — mechanical processes that aren’t easily visible in other systems.”

Like most scientific research, Loerke says, the sea squirt project is inherently collaborative and interdisciplinary. “The project brings together four researchers from different institutions, and we have very different individual areas of expertise,” she says. “I always come away from our conversations feeling more energized about science.”

In addition to Loerke, the team includes Adriana Dawes of Ohio State University, Matthew Ferguson of Boise State University and Megan Valentine of University of California, Santa Barbara. The researchers are participating in Scialog: Molecules Come to Life, a three-year program sponsored by the Research Corporation for Science Advancement and the Gordon and Betty Moore Foundation.