Students enjoying the first few weeks back on campus likely will notice its manicured gardens, eye-catching architecture and copper-studded designs. But high above their heads, a new fixture on DU’s campus is making an impact: solar panels.

This January, the University of Denver finally flipped the “on” switch, bringing life to solar arrays housed atop 18 of the University’s 88 buildings, including its most recent additions, the Burwell Center for Career Achievement and the Dimond Family Residential Village. The project aims to reduce DU’s carbon footprint in line with its 25 sustainability goals to achieve by 2025, and to further carbon neutrality efforts. In the solar panels’ first six operational months, progress has been great, reports Chad King, executive director of sustainability.

“It’s very exciting to see something come to fruition after years of planning and years of construction,” King says. “We set a goal, took planning steps and now we’ve hit that goal. It’s successful, and it’s doing what we said we’d do.”

The initial goal was to produce enough solar energy to account for 5% of the University’s energy consumption. At the six-month mark in June, the panels were producing an average of 6.8%. What’s more, the energy harnessed by each panel feeds directly into the buildings, allowing DU to immediately reap the benefits of this work.

Through real-time monitoring, King and his team have kept a close eye on the University’s solar energy production and have noted some interesting trends. Together, DU’s solar panels produced more than 1.2 million kilowatt-hours of energy. And with its large roof and abundant solar panels, The Daniel L. Ritchie Center for Sports and Wellness has been a standout producer. In June 2021, the Ritchie Center’s solar array contributed an impressive 10% of the building’s overall energy use.

This information is particularly exciting to see on a small, city campus, King says. Institutions such as Fort Collins’ Colorado State University have been producing impressive work related to solar energy. But in Denver’s urban environment, finding enough space for panels has proven challenging.

“Surface area is a challenge when you’re an urban campus like we are, and I think we’ve done really well at maximizing all of those flat roofs,” he says. “There are few who have done more in this sort of setting.”

Of course, King didn’t undertake this work alone. In addition to support from the University’s administration, this team effort has included students, faculty and staff. In fact, the conversation on bringing solar energy to DU started in 2014 with the help of a now-defunct student group called DU Solar and law professor KK DuVivier. While the student group pushed from one direction, DuVivier and a class full of students exploring community renewable proposals pushed from another, presenting their findings to DU’s sustainability leaders. Ultimately, the conversation made its way to DU Chancellor Jeremy Haefner.

“Sustainability and carbon neutrality are vitally important to the University of Denver,” Chancellor Haefner says. “Reducing our carbon footprint ensures a better future for generations of DU students — and for society.”

After investigations and analyses, and a request-for-proposal process, DU found a partner organization and got to work with the help of a power purchase agreement (PPA). Solar panel installation began in May 2019 and was completed in late 2020.

“Kudos have to be given all around,” King says. “Students pushed on this for years. The facilities team took on a lot of extra work to get this done. Our accounting and finance teams did a really great job of due diligence and answering all the questions that came up. To do the PPA agreement like this was a new thing for the University, so it took a lot of people doing extra work to get to where we are today.”

This isn’t the end of the solar story at DU. Already, the University is investigating what phase two of its renewable energy initiative might look like, as it strives toward carbon neutrality. That’s because this work is critical not only on a global scale, but also Denver, King says.

“Whenever we are producing power from renewable sources like this, we are eliminating carbon emissions, which are causing that increase in temperatures we are seeing around the world,” King says.

“We know regionally, too, that that climate impact in Denver is disproportionately affecting the poorest neighborhoods. … All of our work toward carbon neutrality is addressing a global issue, but it’s also really addressing a public good issue locally.” 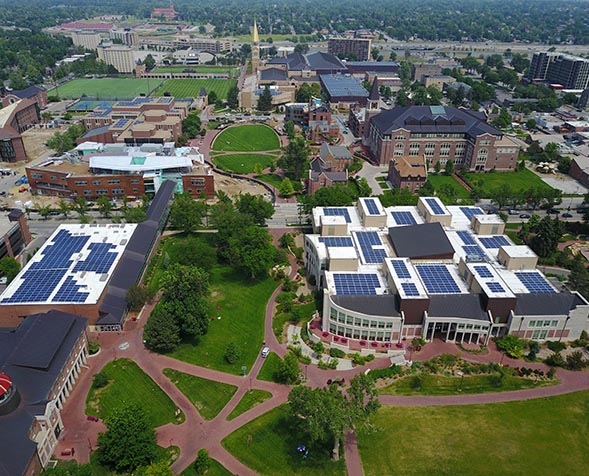